“It has been a long wait and I am happy now,” says Aneesh N Raj, excited about the arrival of seeds of butter lettuce and bok choy from Holland. The 36-year-old, winner of the Kerala State award for the best hi-tech farmer of 2017-18, has four polyhouses, and aquaponics and hydroponics farms on 50 cents at his home in Anchal, Kollam district.

In addition, nearly 25 hi-tech farms have been set up in different parts of Kerala by his startup, QORE3 Innovations. “For instance, seeds of long beans come from Thailand, salad cucumber from Turkey and capsicum from Holland,” he says. His farm has leafy greens such as paalak, mint, celery, parsley, coriander, kale, thyme, Swiss chard and oregano, besides “honeybee-pollinated tomato” and mushroom.

Farmers in Kerala, young and old, have either adapted to or are exploring possibilities of hi-tech practices such as precision farming, micro-irrigation, vertical gardening, hydroponics, aquaponics and integrated farming in a big way.

Although hi-tech farming was initiated nine years ago in the State, it took a while for the methods to catch on. P Susheela, professor and principal investigator, Hi-Tech Research and Training Unit, Kerala Agricultural University, Thrissur, says acceptance has been gradual and there has been some disappointment as well. “However, it is the need of the hour. Unless you embrace new technology, you can’t expect the young generation to take up farming,” she says.

Susheela adds that although the pandemic brought programmes to a halt for a few months, online classes are on in full swing. “People are registering for training sessions in good numbers. Aquaponics is a big draw. While some are passionate to learn, there are a few who have no clue about the practice but want to earn a bumper yield in no time!” she says.

Although many polyhouses closed down after a point, there are farmers such as Aneesh, Shameer S and Ummer Kutty who have tasted success. The humid tropical climate of Kerala and limited choice of crops that can be grown (salad cucumber, long beans, capsicum, tomatoes, bitter gourd) are the major hurdles in running a polyhouse.

Shameer, winner of the State Government’s best hi-tech farmer award 2020, runs two polyhouses in Thiruvananthapuram. “Polyhouses are not compatible with our climate because of high temperature, high humidity and heavy rainfall. So I am always on the lookout for methods to tide over problems and keep it running,” says 32-year-old Shameer, adding that he has planted a seedless variety of watermelon for the first time in his polyhouse.

The drawbacks of polyhouses have seen rain shelters or naturally-ventilated greenhouses being promoted. Shameer says that he too is planning to set up a rain shelter at home, while Aneesh’s start-up has seen a rise in orders for setting up rain shelters. “It was after 15 years of research that the Kerala Agricultural University came to the conclusion that rain shelters are more suitable for Kerala than the polyhouses,” says Abdul Hakkim VM, professor (Soil and Water Conservation Engineering), College of Agriculture, Padannakkad, Kasaragod.

Malappuram-based Ummer Kutty, meanwhile, surprised many by growing dragon fruit in a polyhouse. An electrical engineer in Riyadh for 27 years, Ummer took to farming after he came back to Kerala in 2012.

“Even though I started out by growing salad cucumber in my polyhouse it had to be discontinued. I believe in going for advanced methods and experimenting with crops. In an international WhatsApp group of dragon fruit growers, I came across a farmer who cultivates the fruit in his polyhouse. I researched before I ventured into growing the fruit five years ago. The plant is easy to maintain. There are hardly any pest attacks. You don’t have to water it every day and the lifespan of a plant is 22-25 years,” says Ummer, who grows the fruit in a 12,500 square feet polyhouse and a one-acre open farm.

“My polyhouse is different from the regular type. There are no anti-insect nets and I’ve kept the sides open to let in honeybees to carry out pollination,” explains Ummer. The farm has 18 varieties of the fruit sourced from countries such as Mexico, Hawaii, Columbia, Ecuador, Brunei, Malaysia, Israel…. Of the lot, six varieties bore fruit,” he says. He also promotes dragon fruit cultivation by providing stems and giving guidance on how to grow it.

Hydroponics also has many takers now, especially with the availability of DIY hydroponics home kits for urban living spaces. The team at PlantMe Agro Solutions, Aluva, funded by Kanaka Polypack, is excited that orders are coming in even before the official launch of the firm next month, through word-of-mouth. The soil-less home systems are fun learning tools. They are easy to manage and can be placed in the balcony, they say. 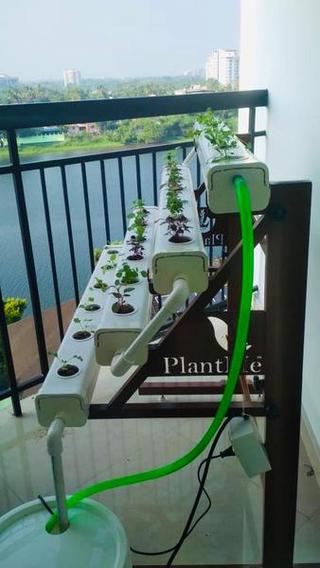 Santhosh Kumar S from Thiruvananthapuram has been making and marketing his homemade hydroponics kits under the brand name, Fresh Leaves. He is also selling home-grown produce under the same brand. Mint is the main crop grown using hydroponics on his terrace of his house, which stands on four cents. “I have also tried growing paddy, onion, cabbage and vegetables. The first batch of strawberries is now in flowering stage,” he says. 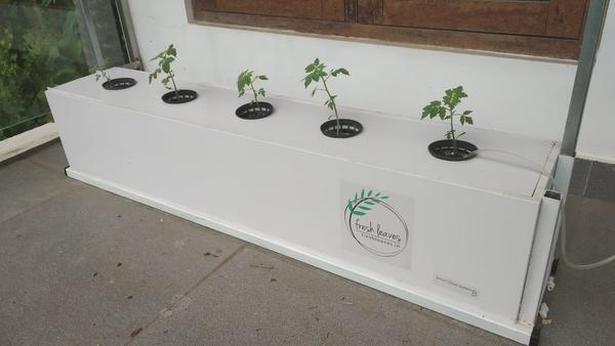 Precision farming is gradually making inroads as well. It stands for precise utilisation of inputs of agriculture, based around four Rs — right input, right quantity, right place, right time, explains Hakkim. It is a technology-enabled, information-based and decision-focussed method of farming. There is increased profit, improved product quality, effective pest management, energy, water and soil conservation and surface and ground water protection. “Open precision farming has big scope in Kerala and all crops except paddy can be grown through this method,” he says.

Among those following the method is Saifulla P from Malappuram who has been cultivating watermelons for three years now. “You can produce 20 tonnes from an acre. But, unless you follow each step to the T, the crop will fail,” says Saifulla. Among the different varieties grown on his two-acre field are Aarohi (yellow flesh and green rind) and Vishala (red flesh and yellow rind). He has regular visitors to his farm who wish to know more about the cultivation methods.

Mandis not an option for Kerala: Agriculture Minister April 6, 2020